Graelyn Brashear’s story in C-Ville on the Western Bypass is remarkable; its depth, range, imagery and clarity are outstanding. Take 30 minutes to read it.

Also notable is C-Ville’s presentation of the story; it’s useful and makes a subject of this breadth easier to digest. I particularly like the Medium-like commenting, which is particularly useful for a story of this length. Really, go see it and read it.

The Western Bypass debate/conversation/saga has been ongoing for so long that it’s often impossible for anyone – even long-time residents of Charlottesville (read: Charlottesville + Albemarle + Central Virginia) to fathom or comprehend the scope of both the proposed road and the political/business/transportation dynamics of the Western Bypass (and our region’s collective inability to efficiently solve transportation and planning challenges).

The C-Ville story is an outstanding summary.

– The current termination of the Western Bypass is silly

â€¦ the current design of the northern terminus is flawed: Northbound traffic from the Bypass is dumped out onto Route 29 just before the light at Ashwood, where the highway narrows from three lanes to two.

– Charlottesville and Albemarle – and the entire region need to be involved in this conversation, not just “the City” or “the County”

Something has to be done, but it really needs to be done 25 years ago. The best solution? I don’t know, but I know that the flawed current proposal is severely flawed. If only our system allowed for a reasonable debate instead of politicians and interest groups fighting rather than compromising.

All this as another anti-Western Bypass group motivates.

END_OF_DOCUMENT_TOKEN_TO_BE_REPLACED

What do you think transportation in Charlottesville – Albemarle should/will be in 2040?

Tonight between 5pm and 7pm would be a good time to start providing your input.

By 2040, maybe the Western Bypass extension will be close to being planned. And we’ll have thought about where the next growth areas will be.

Before we know it, 27 years will have passed. Better to get involved now.

END_OF_DOCUMENT_TOKEN_TO_BE_REPLACED

Before students got on their bikes on Tuesday, a short presentation was given on the history of the bicycle.Â  The neighborhood explorers also reviewed maps of Charlottesville from 1920, to show how much, or little, has changed along their planned route.

Once the ride was underway, cries of â€œI have never been here before!â€ or â€œQuick, look at that!â€ rang out. The students said they were excited to see the city from a new perspective.

â€œI have never seen the city like this,â€ said one student. â€œUsually, Iâ€™m in the back of my momâ€™s car.â€

â€¦ made me think about this line from Earnest Hemingway:

It is by riding a bicycle that you learn the contours of a country best, since you have to sweat up the hills and coast down them.Â  Thus you remember them as they actually are, while in a motor car only a high hill impresses you, and you have no such accurate remembrance of country you have driven through as you gain by riding a bicycle.Â  ~Ernest Hemingway

END_OF_DOCUMENT_TOKEN_TO_BE_REPLACED

Come on, Charlottesville and Albemarle – let’s be truly progressive and encourage having some fun!

Because this. Is. Awesome. Read more at the Atlantic Cities. 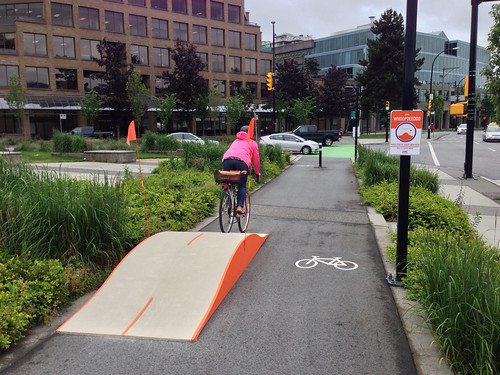 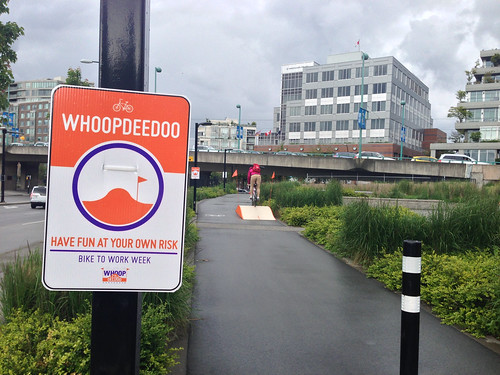 END_OF_DOCUMENT_TOKEN_TO_BE_REPLACED

I wondered in late 2011 what Rio Road would look like in 2016. In a word: busier. And with this news of more apartments, I’ll update my projection to “even busier” â€¦ here’s hoping someone’s thinking about planning to implement pedestrian and bicycle infrastructure.

END_OF_DOCUMENT_TOKEN_TO_BE_REPLACED

I’m watching the CitiBike experiment in New York City and wondering if that could work in Charlottesville. I know this – it’s usually faster to ride my bike from my office in Downtown Charlottesville to various locations – attorneys offices in Court Square (a 4 minute bike ride versus a 10-12 minute drive, not including parking), to Para Coffee on the UVA Corner, coffee at Milli Joe’s on Preston â€¦

END_OF_DOCUMENT_TOKEN_TO_BE_REPLACED

There are six seats on the Albemarle County Board of Supervisors; at least two will be contested this year. Every race should always be contested, so thanks to those who are volunteering to run for seat that pay $14,542 per year.

Pay attention, folks. Albemarle County is (and has been for years) at a crossroads. Think less of the “Austin or Aspen or Arlington ” debate and more of the “Loudoun County or Albemarle County” debate.