That’s the theory put forth by the Piedmont Environmental Council and reported on at Bacon’s Rebellion.

The conclusions apparently found in their study of 120 homes aren’t a surprise to readers of RealCentralVA (see links at the end of this post), but I wanted to differ with one of the conclusions with three points:

Many people continue to prefer living in the suburbs. But Werner’s divergent trend lines make it clear that supply-side of “walkable urbanism” housing is severely under-served.

Apartments – there are going to be a lot more available in 2013 and 2014. A few of the new complexes: Arden Place (Rio Road), The Pavilion at North Grounds (Millmont/UVA), Stonefield Commons (Hydraulic & 29), The Reserve at Belvedere (Rio), the Plaza on West Main (UVA), City Walk (Downtown – more on the Coal Tower). As I said, a lot more apartments will be coming on the market soon.

— And also point out that there are quite a few new construction neighborhoods in the City of Charlottesville that offer true walkability for those wiling to live that urban lifestyle (and can afford to do so).

— And that buying a car just isn’t a desired option for a lot of millennials; many of them want the urban lifestyle (and often that means renting rather than buying):

Economic realities: The costs of owning a car just keep increasing. A 2012 AAA study found the expense of having a car totaled $8,946 annually on average, nearly 2 percent more than the previous year. As transportation alternatives increase, the desire to own your own car diminishes. You’ve got I-Gocar sharing and Zipcar. I love Zipcar’s slogan â€” it says it all for this generation: “The car for people who don’t want one.” There are also shared ride programs, company-provided transportation plans and the old reliables: biking and walking. The Gen Y stats (16- to 34-year-olds) are pretty impressive: Driving was down from 2001 to 2009 (23 percent), biking was up (24 percent) and walking was up (16 percent), according to the National Household Travel Survey.

END_OF_DOCUMENT_TOKEN_TO_BE_REPLACED

I stopped by Beer Run this afternoon (those not in Charlottesville – it’s more than beer!) to pick up a gift and noticed that the City Walk apartments are well underway. That’s a lot of dirt. 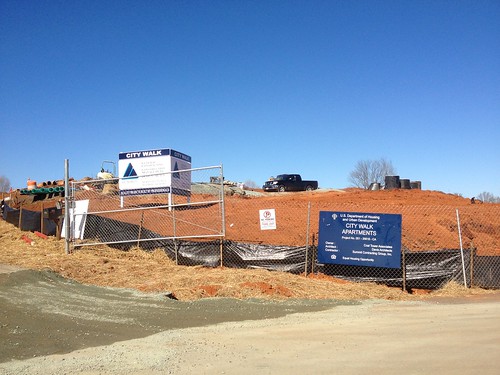 More about City Walk at Charlottesville Tomorrow (including the site plan).

The apartment boom that is currently underway is going to change the Charlottesville real estate landscape – significantly.

END_OF_DOCUMENT_TOKEN_TO_BE_REPLACED

It’s coming. I mentioned in May the coming Coal Tower/City Walk project.