From the NAR’s page:

Federal Housing Administrationâ€¨
HUDâ€™s Contingency Plan states that FHA will endorse new loans in the Single Family Mortgage Loan Program, but it will not make new commitments in the Multi-family Program during the shutdown. FHA will maintain operational activities including paying claims and collecting premiums. Management & Marketing (M&M) Contractors managing the REO portfolio can continue to operate. You can expect some delays with FHA processing.

Update 2, 1 October 2013 – lending seems to be ok in face of the shutdown, for the most part. A greater challenge will be the IRS –

A less-talked about impact of the shutdown on housing is the impact on the Internal Revenue Service (IRS) and the Social Security Administration (SSA). The IRS has announced they will not process any forms, including the issuing of tax return transcripts (Form 4506 T). The Social Security Administration will retain a skeleton staff, but may prioritize new claims, resulting in difficulties in verifying Social Security numbers.
Some lenders and brokers have been able to race to get these documents certified for loans they currently have in the pipeline before the shutdown.
…
But new mortgage applications may face delays without these crucial documents. So far, secondary market participants, including Fannie and Freddie, have been unwilling to alter or suspend overlay requirements which require these documents in order for a loan to be sold onto their books.

The biggest threat is uncertainty. And decreased confidence in the market and the government. That said …

So the government might shut down â€¦ so what? (with respect to real estate). VAR Buzz has a starter:

Fannie and Freddie will continue to operate. They arenâ€™t funded by the government; they make their money via fees.

However, FHA, VA, and USDA loan applications wonâ€™t be processed.

If an application for an FHA-insured loan has not been approved by the time of the shutdown, it will have to wait until after the shutdown ends.
FHA-backed loans accounted for 45% of all mortgages used to purchase homes issued in 2012, according to the Federal Reserve. The FHA alone insures about 60,000 loans a month.

Nearly 20% of transactions might not seem like a lot – until you’re one of those FHA, VA or USDA buyers – or sellers waiting for the FHA loan to fund and close. Then that’s all that matters. Everything is affected when these are delayed – movers, attorneys, real estate agents, utilities, jobs, schools, household goods – everything.

Update: per @rqd and then USA Today – more uncertainty.

43. Does that mean I can’t get an FHA mortgage? No. The Federal Housing Administration says it “will endorse new loans under current multi-year appropriation authority in order to support the health and stability of the U.S. mortgage market.”

44. Does that mean I can’t get a VA mortgage? No. The Department of Veterans Affairs says loans are funded via user fees and should continue. However, during the last shutdown, “loan Guaranty certificates of eligibility and certificates of reasonable value were delayed.”

Some of the things I’m reading this morning trying to educate myself:

END_OF_DOCUMENT_TOKEN_TO_BE_REPLACED 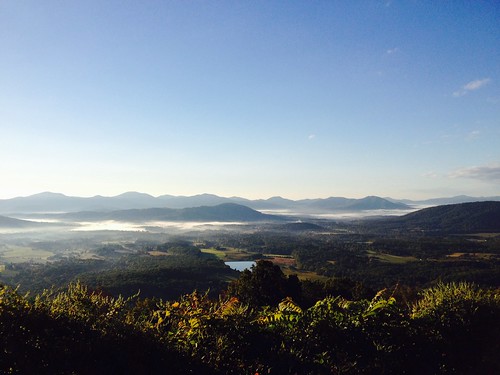 This is only about 15 minutes from Downtown Crozet (by car) and about an hour or so on a bicycle.

I took this photo on yesterday morning’s bicycle ride to the Blue Ridge Parkway. It’s easy to forget the beauty we have surrounding us.

This is a nice panorama I took.

END_OF_DOCUMENT_TOKEN_TO_BE_REPLACED

This week The HooK closes its doors, and Charlottesville returns to being a one-weekly-town. This is a remarkable look back at 12 years of The HooK – some massive stories that have shaped Charlottesville. Thanks…

END_OF_DOCUMENT_TOKEN_TO_BE_REPLACED

Zillow has a “rental estimate” on the page for my listing in Charlottesville that is for sale, and it’s confusing enough that people are inquiring as to whether it’s for rent. Consumers – let this be yet another reminder that if you’re searching for homes for sale in the Charlottesville area, the two best places to search are my site and Nest’s site. If you’re searching for rentals, start here and here. Searching for rentals? Start at Nest and then my site again .

My listing is not for rent.

But thanks, Zillow for making it easier to discredit you to my clients and consumers. One day, you might be right enough; one day.

Thanks for contacting us! We include a rent Zestimate on properties, even when they are not active for sale or for rent listings, because we feel this information would be useful to a homeowner if he or she was thinking about renting out his or her home. Just as many homeowners are curious about the Zestimate for their property, the believe the Rent Zestimate would be interesting and useful to them as well. When a home is for rent it has a purple home icon and displays “For Rent.” When a property is not for rent or for sale we display “Not for Sale” with no color in the home icon. Please see attachments. Since displaying “Not for Rent or for Sale” would be redundant on each property, we default to “Not for Sale” for inactive properties on Zillow.

No. It’s not helpful or useful; it’s confusing.

No, those aren’t helpful either.

But, thanks for providing interesting “information.”

END_OF_DOCUMENT_TOKEN_TO_BE_REPLACED

I won’t know what you (the readers) are thinking anymore – and that sucks. Google’s not sharing keyword information with site owners anymore â€¦ and this is huge.

For years I’ve looked at the keywords that have brought visitors to RealCrozetVA and RealCentralVA to discern what questions to answer and what was trending in the minds of my readers and visitors.

Google’s changing all that. I wondered about this a few weeks ago, but this week brings confirmation.

It appears that Google has cut off keyword data altogether.â€¦ This means no more keyword data will be passed to site owners.

What this means is that I (and other site owners) need to accept not knowing search keywords anymore. Such is life. While keyword stuffing in an attempt to game Google has been common practice by many (not just in the real estate writing space) for years, I’ve done that only a handful of times – and have stated my intentions every time.

Ultimately, as I don’t have my own Building 43 filled with people smarter than the Googlers, I’m going to keep trying to write about stuff that interests me, answers questions about the Charlottesville real estate market, growth, politics, etc and will continue to try to answer my clients’ questions.

END_OF_DOCUMENT_TOKEN_TO_BE_REPLACED

Part 1 of at least 2. Part 2 coming next Wednesday.

Home buyers like the inter webs. Fact. What follows are steps to search for a home in the Charlottesville area – without engaging a real estate agent (we’ll get to why it’s usually crucial to hire quality buyer representation). I first wrote Youâ€™re Going about It all Wrong â€“ Or How to Search for Homes in Charlottesville (Without a Realtor) in early 2009 and thought nearly 4 years was sufficient time to warrant an update.

In 2009, I asked a particularly well-informed buyer client if she’d mind describing her search process. Today’s post updates the process for 2013.

1. Your IDX home search site– Browse the map for affordable homes in places I want to live. Or, check the local MLS for new listings and then look on IDX to see if there is more information there. Now, a lot of people are using our site at Nest to search for homes as we’ve put together a great area search and educational section as well. (I don’t particularly care for Zillow or Trulia for searching for homes to see today or this week; but for supporting and ancillary information, they’re great).

2. Look up the found home on Charlottesville City Assessment (Ed note: or Albemarle County or Fluvanna or Louisa, etc.) website to find:

a. Tax Assessment price (In my opinion, assessed values have little to no correlation to what a propertyâ€™s actual market value would be)

b. Who owns it? Does the owner live there? This often leads to another search on the City Assessment website for the ownerâ€™s name to see how many properties the owner has. Do the owners seem to be in good financial shape or have they made a lot of bad decisions (i.e. may need to get rid of the property to stay above water)?

d. Look at pictures to see how different the home looked a few years back. (note: this leads to a separate rant about Realtors stripping the MLS of photos of their listings when the listing expires/sells â€“ this kills the accuracy and historical context of the MLS and devalues the MLS as a useful thing.)

e. Study transfer information to see when house was last sold, what it sold for, when it may have had work done, etc.

Realtors have access to a pretty useful (and underused) tool called RPR which allows us to compare the current listing to the previous ones.

END_OF_DOCUMENT_TOKEN_TO_BE_REPLACED

Albemarle County is in discussions about whether to stop ranking students.

In response to calls from parents to stop reporting class rankings to college admissions offices, Albemarle County Public Schools is in the process of reviewing its policy.

Currently, Albemarle reports class ranks to colleges and universities in deciles, but many parents feel that doing so paints students below the top 10 percent negatively in the eyes of selective universities.

– Does *not* rewarding kids for achievement disincentivize them from trying harder?

– When folks are moving to Charlottesville – Albemarle what rankings to they consider in public schools? Do they factor in what percentage of

There is a great discussion at RealCrozetVA.