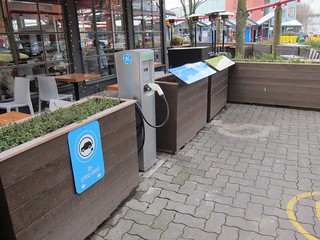 I can’t imagine that we won’t see charging stations in at least one new Charlottesville neighborhood in the next two years.

But â€¦ which neighborhood will have charging stations? Which builder will offer them first? If the cost is really about $200, it seems like a no-brainer option, right?

Here’s hoping the City of Charlottesville doesn’t take this upon themselves to legislate as Palo Alto just has â€¦ we’re not close to Tesla, after all.

The city council in Palo Alto, California, unanimously voted Monday night to make a small change to the city’s building code that signals a big shift in the future of private transportation. Now, every new home constructed in town will have to come pre-wired with the ability to charge electric vehicles, a move designed to ensure the city that’s home to cutting-edge car-maker Tesla will also be home to the EV industry’s early-adopting consumers.

END_OF_DOCUMENT_TOKEN_TO_BE_REPLACED

I’ve written this for years. And Jay at Zillow has written it in a way that hopefully now consumers will lend credence to my words: (bolding mine)

But – they used to aspire to consumers using the zestimate to negotiate and thankfully and rightly removed that language.

Zillow is awfully popular though.